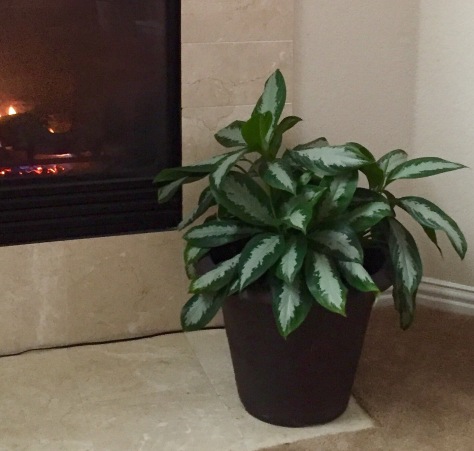 Let me share some Wisdom that was laid upon me early yesterday morning.

Look at this photo. In it you will see a potted plant next to the fireplace. What’s the big deal? I’ll tell you. This is the plant given to me to take care of when my cousin “Bubba” died in 2010, approximately SEVEN days after I got married. I married Christmas Eve, he passed New Year’s Eve. Five years later, his plant is still thriving but that wasn’t always so. I always took special care of that particular plant. I watered and pruned it. After a while it was no longer thriving. It began to wither, the leaves became sparse and I could tell it was dying. After a while, I thought there was no hope left for “Bubba’s plant,” but I refused to let it go. Bubba was like a little brother to me and when he was a young boy, like a son. 24 years old is too young to die and he had so much living to do.

So what happened to the plant you ask? There’s an answer to that too. I evaluated the factors contributing to the death of the one plant I cherished so much and came to three conclusions:

1) The plant had been in the same spot receiving DIRECT sunlight for years. All plants don’t need direct sunlight they just simply need to be in the “presence” of the light.

2) The leaves were yellowing because of overwatering but I couldn’t understand why its growth had become stunted and wasn’t thriving.

THEN WHAT WAS MOST IMPORTANT HIT ME:

3) THE PLANT HAD OUTGROWN IT’S PLANTER!!! Its roots were exposed and could no longer spread because its soil had eroded.

To solve the problem, I re-potted the plant into a planter that could accommodate its growth, added more soil to COVER its roots and repositioned the plant so it was no longer receiving direct sunlight. The result: ABUNDANT GROWTH. The new planter not only made room for the roots to spread and grow, but old leaves were revived, new leaves formed and as I type this, sprouts of new leaves can be seen.

So what did I learn from my quiet time in reflection:

In life, we sometimes have to be “RE-POTTED,” our roots “RE-COVERED” and our life “REPOSITIONED” in order to thrive.

Change is inevitable. We can adapt to it or resist and risk stunting our growth. I could have given up on “Bubba’s plant,” but I refused. Look at it now. Growing. Thriving. Flourishing. THAT’S LIFE. THAT’S LIVING.

Rest In Peace Bubba…. I Love You.

One thought on “MOTIVATION MONDAY: Plants Can Teach Lessons Too?”